Trespasser- The Lost World: Jurassic Park; a sadly failed and forgotten game from 1998. Instead of delivering on a fully-realized world of dinosaurs in a 3D environment, it instead produced endless headaches for most of its gamers as they attempted to trek through the various bugs and glitches; much more terrifying than any dinosaur. However, the story that was told through Richard Attenborough's performance of John Hammond was masterful and quite unforgettable. Unfortunately, it was a performance that would have been lost entirely if it weren't for efforts to excavate all the audio files from its depths.

I didn't want fans of Attenborough or Jurassic Park to miss out on what I believed to be a deeply thoughtful and melancholy look into the mind of the park's creator: a story not told with this level of personal marred recollection in the novels by Michael Crichton or the films by Steven Spielberg. In the past, I only had what was recorded for the game in its files. It was in a jumbled mess that I had to put in a storytelling order, fitting it as correctly as I could, like pieces of a complex puzzle. Setting it to Bill Brown's incredible score from the game was like having Attenborough's words put to a lovely beat and rhythm to be enjoyed. The end result was Jurassic Time: The Memoir Of John Parker Hammond (a name derived from the game's strategy guide). The audio program was finally way to experience the story apart from the game, in the most complete way possible. Through various editions, I eventually added some sound effects, additional tracks, and other enhancements into the mix.

After some attempts to get the story across, things became pleasantly complicated when I received a wonderful gift from the game's writer, Austin Grossman. It was a complete scan of the actual script read by Attenborough for the recordings! However, on those pages were about 80 sets of additional dialogue that were apparently never recorded. The additional dialogue had wonderful and engaging information that really gave a bigger scope to the story that was told. It was then that I knew I had to "excavate" a proper book compilation of the entire story. Just like the audio files, the script was all out of order; categorized by sections of dramatic tone for Attenborough to read instead of within context of storytelling. After putting it all in the best order possible, I made the entire book look like something John Hammond himself had put together. It comes complete with fantastic illustrations. This style was later adapted into an engaging video program.

The Hammond Memoir has been through many variations over the years, but finally this year the "Definitive Edition" was created. I still cannot believe it has been over a decade since I decided to finally bring Hammond's buried story to the surface for everyone to enjoy. This final incarnation (in all three forms) will hopefully stand the test of time like the very story it tells.

Jurassic Time: The Memoir of John Parker Hammond is something I have been very proud of preserving, and will always hold dear. I hope you will, too.

VISIT THE WEBSITE To Watch The Video Program Or Listen To The Audio Program: 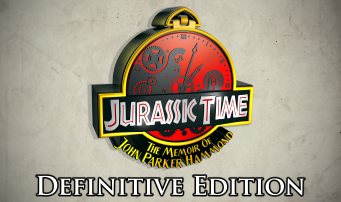 Just got done watching. Amazing as always! I like to think these stand as one of the beacons of creative output which Jurassic Park has inspired over the years. The elements supporting that emotion of secret history and sorrow are all present. Once again I quite appreciate the piano pieces included. Odd to think the first version was 10 years ago...
->Tres2020 Starter Kit

I will definitely be giving the complete version a watch at some point after Xmas...from what I've seen so far, it's probably the most creatively impressive version so far, although the version with the Trespasser in-game footage will always hold the special place in my heart.

The "Definitive Edition" is finally released! I hope you all enjoy the new videos, which have lots of new surprises in store for people familiar and unfamiliar with the previous versions. Includes more sound effects and a lot more! You can watch the entire playlist at the link below.

Also, now open, is the brand new website where you can download the updated audio version, Excavated PDF book, and a ton of other features involving Jurassic Park.

This is some great stuff

Check out this Saturday for the new tracks to drop!

All the new tracks are up. Check out the site for the full playlist, the new audio download, and the new book download.

End of an era.

EDIT: uh... where are the new downloads to be found on your site?

Congratulations on this, I will have to give it a proper listen tomorrow. Perhaps some of these new lines would sound good in Tres itself...
Current Project: Cloning Facility | My Release Thread

I am sure they would! You can also download the new audio that was made apart from the Memoir, as part of the "Preserved Hammond Recordings":