Read all the other stories from the world

And, most recently, I glanced on the thought to illustrate a Trespasser physics CMagnet glitch, and realized this image.

Haha, I like the magnet glitch door! Funnily enough I haven't had that happen for quite some time, though it always seems to happen with those metal cages from JPDS. It would be fun to create a level where the only method of defeating dinosaurs is to attempt to break the physics engine.
Your depiction of the Plains is quite interesting...something between JPDS and what a potential vanilla PL level may have looked like.
Current Project: Cloning Facility | My Release Thread
[mimg]https://i.imgur.com/4ojk3lG.png[/mimg]
Top

Intensional physics glitch, hmmm... I recall the cabinet in the Dam Control Building glitches frequently, as well as the white lab locker from TC~Isle. There is of course the issue of game-crashing, but maybe that's part of the difficulty design. I think CMagnets might glitch more, when their pivots are particularly far from the physics of what they're holding.
Hmm, you are right, that looks a lot like the JPDS plains area. Probably means I ought to have used a more green grass texture. I'm still unclear what the base PL terrain texture would have been.
->Tres2020 Starter Kit

I have been busy! Here are the most recent three sketches I have been about these past days.

I wanted to reach back into my childhood days of dinosaur-drawing, and was pleased at being able to still do it... Not sure which island this is on, or if it is in or out of a paddock area. Treating terrain sketching as terrain objects is helping a lot too. 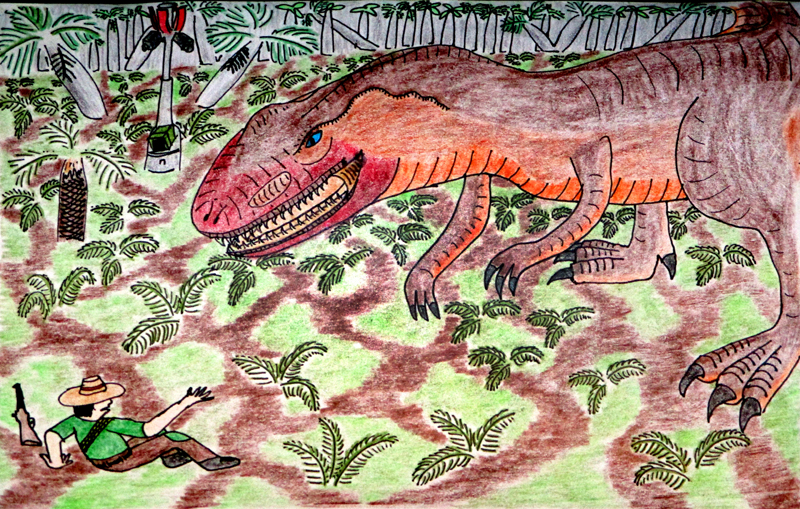 This one came to mind and I was immediately bound to draw it. An interesting way to look at the past, I believe. 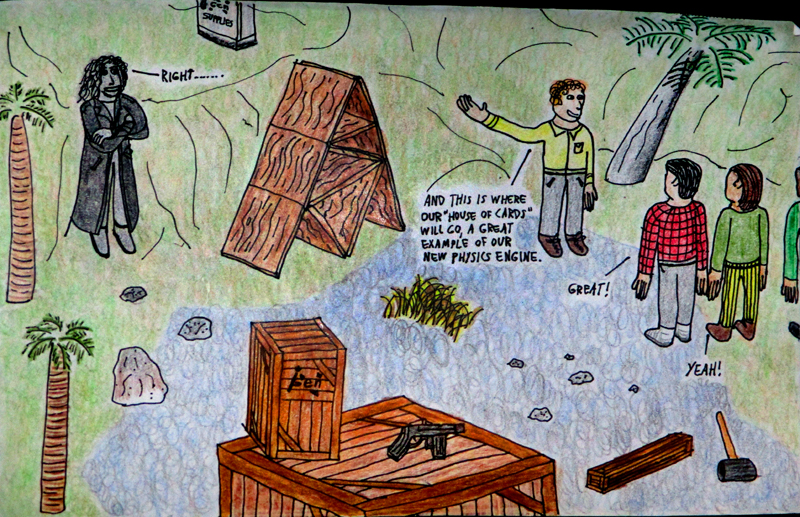 This drawing shows the hybrid dinosaur which was *almost* included in Jurassic World, inside the Restricted Zone paddock that covers the abandoned Jurassic Park region of the island. I have always been fascinated with this place. It reminds me of the HSP in JPDS. Tried out a new way of drawing trees as well. 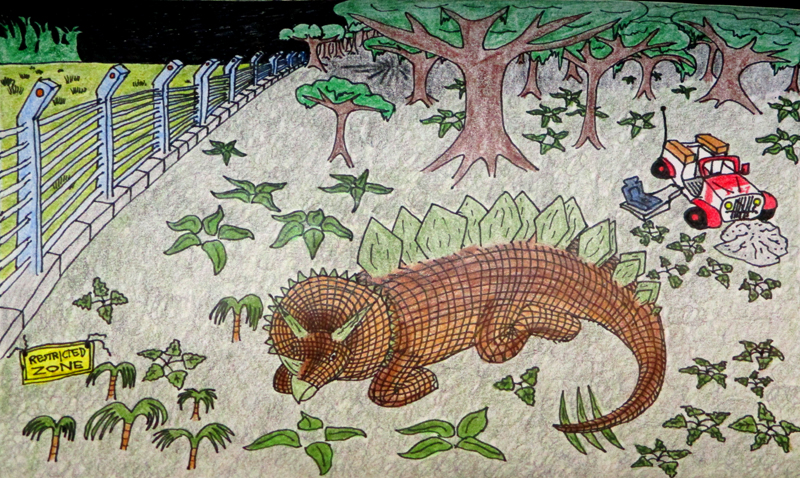 LMAO, the "Tres Dev Prehistory" is funny. I guess the people on the right are players? Who is the guy on the left?
Active project: Trespasser: Isla Sorna - Working on PH2-IT (and experimental BE-IT).

Heh, I suppose those could be players. On the left is Chaotician Drac.
->Tres2020 Starter Kit

Alright, here are my next three...

"Spies of The Lost World"

Basically I had a mind to try my hand at TLW Pteranodon. Also included are some JPDS~streams mushrooms. 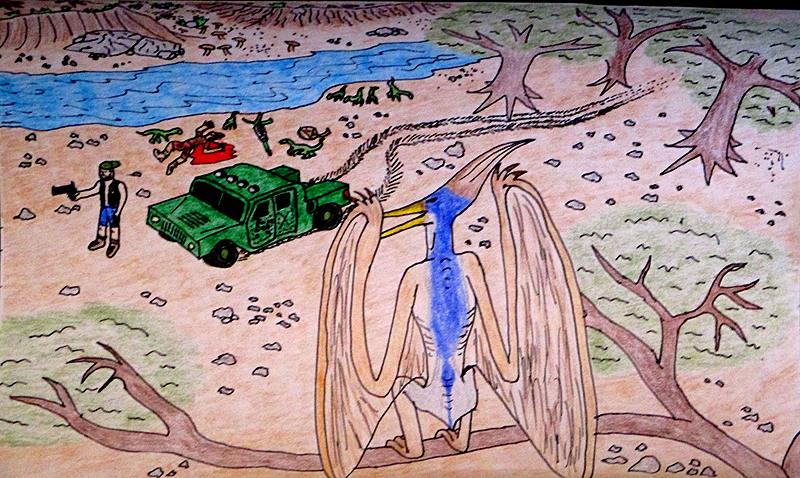 What exactly his plan is, I'm not sure. 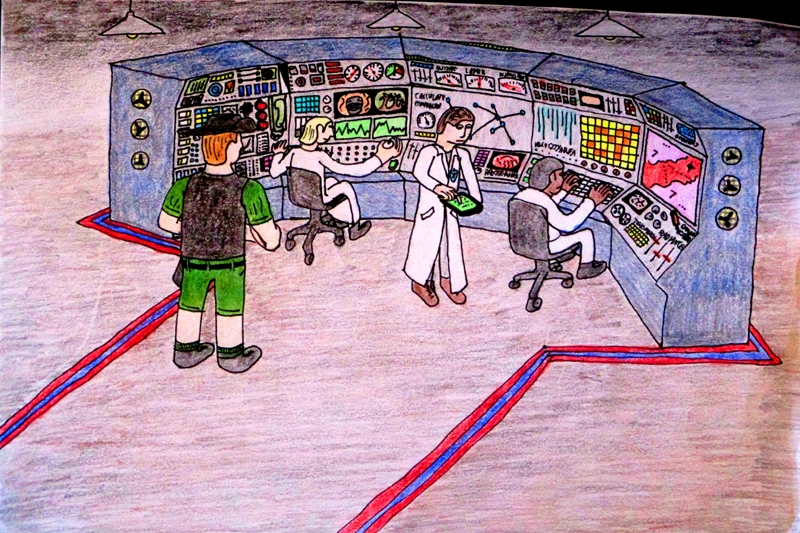 A surrealistic image of some mysterious portal. I am left to assume compies came into my art so much recently, as a result of the animatronics seen recently in set photos of JWD. 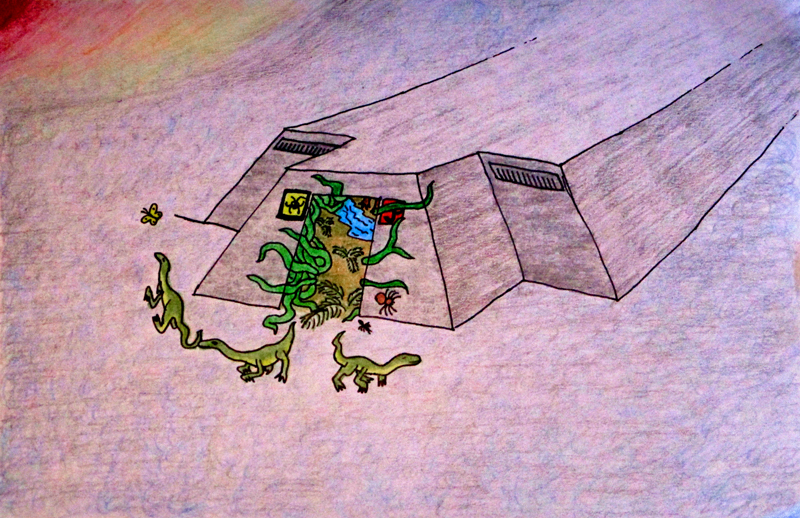 Really nice. I do enjoy that you have added colours to the sketches.

My thanks. The color aspect does make them come considerably more alive. I view my sketching as an activity of creating windows into Trespasser mods I expect never to have the time for building.

Indeed, I prefer that this image should describe itself, rather.. It has been a very long time since I put together a swamp area in Trespasser. JPDS had no less than THREE, possibly I grew weary of their creation. 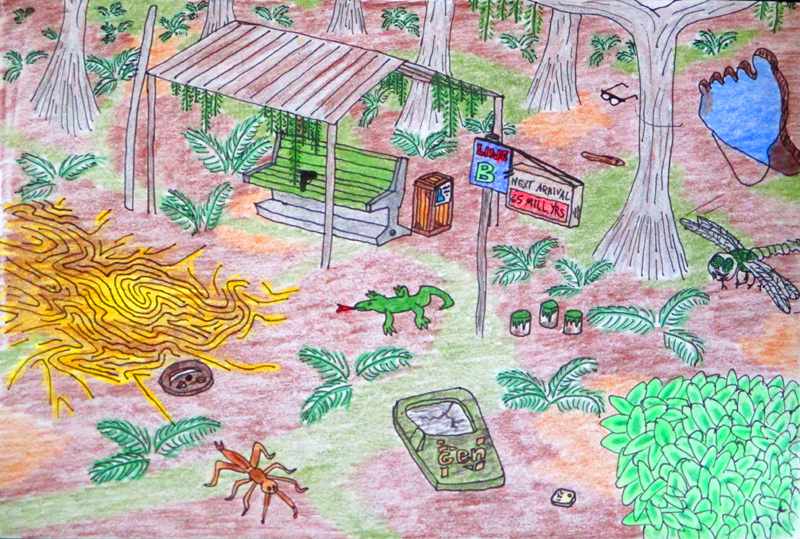 This one was meant to be a good deal more sublte, for the appreciation of silent landscape. The tree on the right surprised me by its emergence and I might well wish to create it in 3D at some future time. 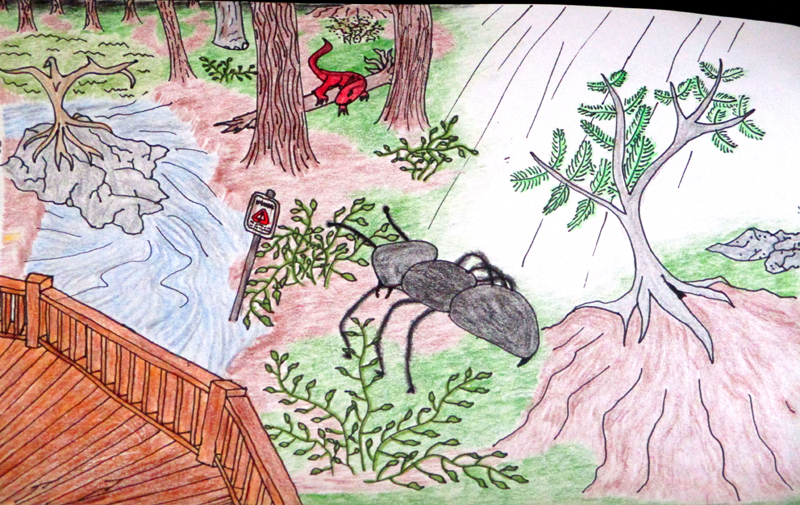 Depicting a Maiasaura, this scene was part of a more calm phase I had recently, in mental space. It is quite appreciated to experience. Maiasaura do appear in TLW novel and I feel a bit more appreciative of them, now, than I have been in past. 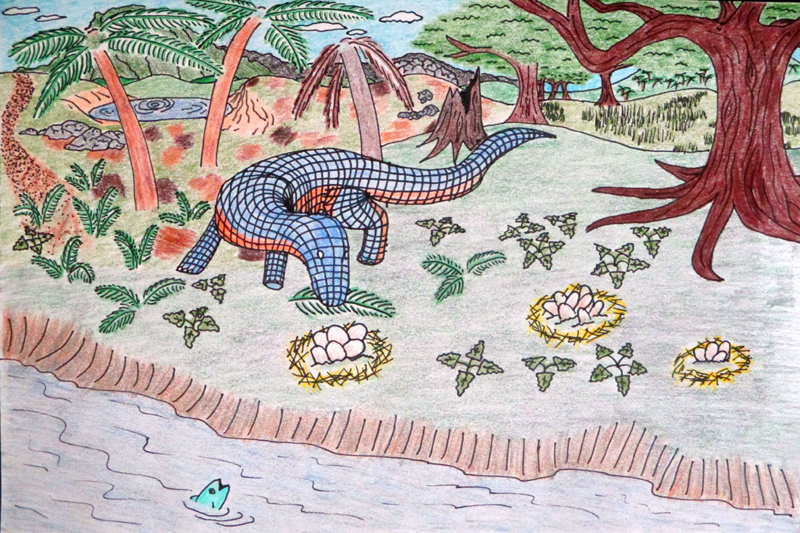 I am really quite pleased to have an alternate outlet for Tres art-making. Lets the TresEd/Max gears cool down without losing track of adding to Isla Sorna and its connections.

For some reason I enjoy putting the PH in new places. PV, 4ushT... This location looks very much South-Sorna, but with some new twist I suppose. Adding the ship later has made me want to draw the plantation during some time when it was still operating. An idea brought me awake one morning across the River, I almost didn't draw it. What if some non-Earth world in an unknown time, had an island which had multiple layers of history running across its length, each more or less primitive than the last? Coffee was brought to myself and those gathered, as I leaned on a concrete bench and outlined my plan. This idea of mine is a bit more surrealist in setting. Sort of imagine a very early graphical landscape in a version of computer technology Earth didn't come up with, where hardware with the ability to handle landscapes of very basic shapes and greyscale came before various other advancements. Probably it's not even computed by triangular geometry. And in this odd reality, some version of InGen we've never read about carried out very early work on the frontier of dino-island colonization. I had fun drawing this, still wondering about it. 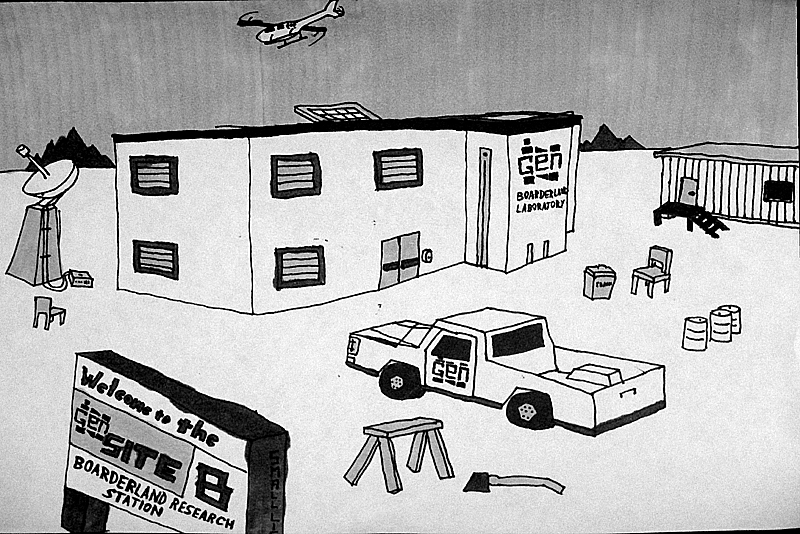 That tree on the left looks like a bird!
Hm, shouldn't huge ants technically be possible in the game? But with only 4 legs working?

This somehow reminds me of The Land Before Time movies. It would be fun to make a level inspired by those...

We DO need some shipwrecks that could be added to levels, old ones that is part of the jungle or old ones on the shore!

Heh, I indeed had not noticed that, nice find... The quest for insects in Trespasser continues.

You remind me that TheGuy once began the initial steps needed for a Cartoon Tres, including that models had black, inverse-sided shells around them to create the 'ink outline'. I quite hope to see a cartoon mod released one day.

Trespasser has been asking for shipwrecks since some time ago. I do believe in the future appearance of one.

Haha. Lost Neutraland may be a great concept, but those towns you see are populated with people...
->Tres2020 Starter Kit

Draconisaurus wrote:Haha. Lost Neutraland may be a great concept, but those towns you see are populated with people...

You've made 2D people before

Liking your sense of creativity here. One day you should consider using some of these drawings as concept art for a level, as you talked about with the tree. Maybe take some of your favourite ideas and combine them.

Draconisaurus wrote:Haha. Lost Neutraland may be a great concept, but those towns you see are populated with people...

You've made 2D people before